Crummy phone photo. The bike is so new we haven’t even taped the bars yet and already out playing in the rain!!!

Andy got his new bike a few weeks ago.  He came to my shop with the last few parts and we spent a couple hours finishing the assembly.  By test ride time, we were pretty hungry and it was starting to rain so we didn’t go far, just downtown for lunch.

It’s been a fairly long process- a couple years ago when we were rolling out on a ride, literally on the road and underway, he handed me an envelope.   “My deposit,” he stated.  I was a little surprised and quite pleased because he hadn’t talked about having me build him a bike and he already owned several very nice ones.  There’s another post here if you’d like some more background.

This project was really a delight because while Andy is a very experienced cyclist with very particular ideas about the correct way of doing things, he gave me almost completely free rein.  I really appreciate that level of trust and from Andy’s feedback, it seems like I didn’t disappoint:

After the first 100km ride:

I left at 0800 on my 100 km permanent. It was cool and dry and of course soon after crossing onto Mercer Island it began to drizzle. I was day dreaming and several times rode off route. I stopped and ate breakfast (at the counter for faster service) at a cafe in Maple Valley and finished the ride faster than I ever have. More than likely riding alone contributed to that but I’m just sayin…..

The bike descends well. Stable and comfortable. It is easy to get up to speed when I stand up on the pedals. There is not noticable flex in the forks nor is there a “mushy” feeling from the tires. Comfortable ? Yes.

Did I mention the bike was light? 23.5 # with rack, decaluer, pump, 2 bottle cages, blinky light, dyno front and rear light, spare front light and dyno hub. That’s impressive. the bike would be under 23 if I took  off the blinky and the front spare light for sure.

Thanks again for taking your day off to help me get the bike on the road. I hope my concern over the orange color caused me more anxiety than you. It looks great. Often times so called custom bikes do not fit well. Some of that may be also based upon the customer asking for an incorrect size based upon information gathered from a different bike. This is my second custom bike. The first never felt quite right. Too long in the top tube and it was difficult to get it up to speed. I even rode it across the country.

And after a recent 400km brevet:

The bike performed flawlessly on the ride. No problems. It rides well no hands when changing clothes (w/loaded HBB). Floats over crappy pavement and was a pleasure to ride on steep, winding descents….in the dark. The light pull of the Raid brakes is awesome.

Later this month, we’re scheduled to ride a 1000km brevet together.  I’ll provide a ride report afterward!  For now, here are some photos:

After a couple hundred rainy miles

Andy supplied the fender reinforcement, I think it looks great! 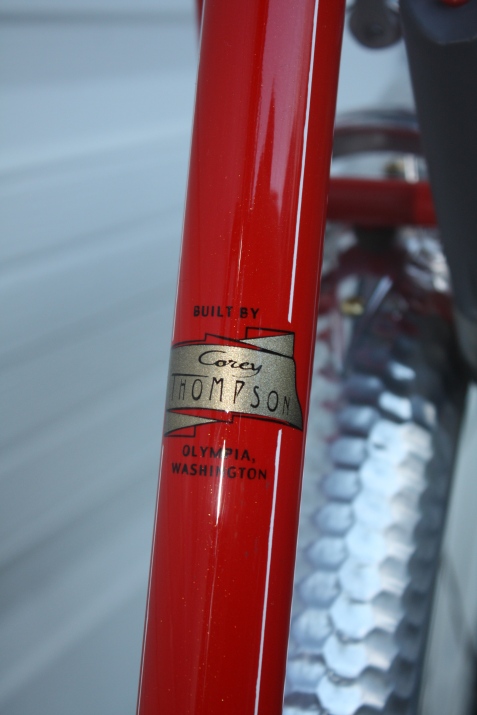 This entry was posted on June 15, 2013 by Thompson Custom Bicycles. It was filed under Uncategorized .